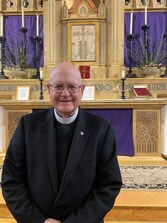 Fr. Larry Parrish, “Fr. Larry,” is a retired priest, canonically resident in the Episcopal Diocese of Nebraska, residing in Raytown, MO, and serving, as needed, by invitation at St. Mary’s.  He is also a retired United Methodist pastor, having served United Methodist churches in Kansas for 31 years after receiving his M.Div from St. Paul School of Theology, in Kansas City, MO, in 1973.

He became an Episcopalian in 2004, and began serving St. Thomas Episcopal Church in Falls City, NE, as Lay Pastoral Leader.  He was ordained an Episcopal priest in 2010, then served St. Thomas as Rector until his retirement in November of 2017.

Concurrently with his United Methodist and Episcopal parochial ministries, Fr. Larry served as a Chaplain in the Kansas Army National Guard from 1985 to retirement in 2007.  He served as an enlisted soldier in the U.S. Army, 1968-70, and is a Viet Nam veteran.

He has been married to Mary, his best friend and partner in ministry, since 1984.   She is a former social worker for the State of Kansas, a retired adjunct college instructor in the social sciences and ethics, has a Masters of Christian Ministry from Friends University, in Wichita, and is a nearly life-long Episcopalian.   They have two sons and their families (three young grandchildren!) in the Kansas City Metro area, a daughter in Wichita, and an adult grandson in Seattle, WA. They moved to Raytown from Falls City in November of 2018 and live there in their first home of their own with a cat named Jake.