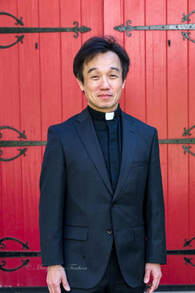 Sean received his B.A. in History and Minor in Religious Studies from Cornell University and M.Div., A.M., and Ph.D. from Harvard University. Originally from a Presbyterian and Methodist background, he was “Anglicanized” through his studies at the Bishop Kemper School for Ministry (BKSM). Born in Seoul, South Korea, Sean moved to the Kansas City area with his family at a young age. It is only recently, however, that he has discovered the delights of the downtown area, having moved to the Westside about a year ago. He especially enjoys long walks in the neighborhood with his golden retriever, Samson.
In addition to serving at St. Mary's, Sean teaches East Asian and world history at the University of Central Missouri (UCM) in Warrensburg, where he has worked for the past fourteen years. He does research on the history of Protestant Christianity in Korea, and he is more broadly interested in church history.