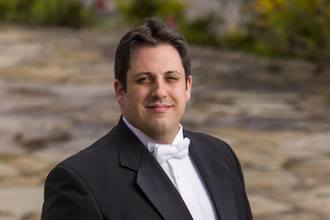 Anthony J. Maglione is a graduate of Westminster Choir College of Rider University, East Carolina University, and the University of California, Los Angeles. He is the Director of Choral Studies at William Jewell College where, under his direction, the Concert Choir was Runner Up (2nd Place) for the 2015 American Prize in Choral Performance, College/University Division. In addition to his responsibilities at William Jewell College, he serves as Director of the Greater Kansas City AGO Schola Cantorum, Conductor Emeritus of the Freelance Ensemble Artists of NJ, a symphony orchestra based in Central NJ and as Artist-in-Residence and Choirmaster at St. Mary’s Episcopal Church in Kansas City.

Anthony has made numerous guest conducting/clinician appearances and has prepared ensembles for such esteemed conductors as James Conlon, James Jordan, David Newman, Donald Neuen, and Alex Treger. Ensembles under his leadership have performed nationally and internationally at renowned concert venues including Disney Hall in Los Angeles and Carnegie Hall in New York City.

​​Dr. Maglione can be reached by clicking here.